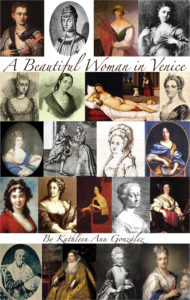 The media portrays beauty in such narrow ways—skin and hair and eyes and curves. But anyone who has loved another knows that we also find beauty in someone’s determination or courage, his or her intellect or prowess on the field or with a paintbrush.

Enter a parade of Venetian women to prove this point. We could look at any city or era and find examples of beautiful people. I happened to focus on Venetian women from the early days of the Republic in the 14th century up till a more modern Venice in the 19th century. In my book A Beautiful Woman in Venice, I chronicled the life of remarkable, talented, and often unknown women who display beauty in many forms.

Life in the 13th through 15th centuries posed many dangers for women in particular. Crimes against women were rarely prosecuted, and if a woman did not have a father or husband to protect her, whom could she turn to? Lucia Tiepolo was one of a handful of women who created a safe community where women could live with fewer fears and with more support. Lucia entered the convent early in life and in 1369 received a vision from Jesus to build a church and convent in his honor. After bringing in the help of a priest and using her skills as an herbalist to raise some money, Lucia had amassed enough cash to break ground for the Church of Corpus Domini and its attendant convent. People scoffed at her high hopes to provide a home for 60 women, but through diligence and grace, the convent of Corpus Domini eventually provided a safe refuge for 72 nuns. Sister Bartolomea Riccoboni, who kept a chronicle of the convent’s years, exclaimed, “Just imagine what joy lingered in those minds that had for so long yearned to be enclosed for love of the Lord Jesus Christ!” Lucia Tiepolo and her sisters were followed by others who shared their wealth and talents to provide communities such as this one for other Venetian women. Their beauty lies in their care and concern for others, their sense of agency and determination.

The 1976 film Network brought us the oft-quoted line, “I’m as mad as hell, and I’m not going to take it anymore!” Way back in 1310, shop owner Giustina Rossi felt the same frustration. Beneath her window she saw rampaging rioters as they rushed toward the Doge’s Palace with plans to overthrow the government. The noise and chaos infuriated this patriotic woman who wanted to protect her government, help restore order to the streets—and apparently grind her polenta. An engraving at the site of her former home shows her leaning out the window with her mortar and pestle just before she dropped it on the head of the rebel gang’s flag bearer. When the poor man lay bleeding on the ground, it caused his comrades to disperse, giving the Doge’s guards the opportunity to quell the rebellion. Giustina’s actions turned the tide that day, and the Doge rewarded her by granting her requests. She asked if she could fly the Venetian flag from her window on feast days and also that her rent would never be raised. Her humility and patriotism, not to mention her grit, display a unique beauty that supported her city.

Giustina was from the working class, known as the popolani. At the highest level of Venetian society were the nobili. While Venice was a republic and did not have royalty, the State did elect a Doge as its ruler. Women had no place, face, or voice in politics, with very rare exceptions, one of them being Morosina Morosini Grimani. Two years after her husband Marino’s coronation, in 1597 Morosina held her own ceremony to honor her position as dogaressa. Venetian women of the upper classes rarely appeared in public at all, and yet for her coronation, Morosina appeared in a procession with over 400 women. She and her daughters were dressed in fabrics she had designed herself as they tossed coins to the citizens and had bread and wine delivered to all across the city. A portrait of her shows her brazenly looking at the viewer, as if beckoning us to follow her. Historian Bronwen Wilson writes, “Through the power of the representations of her public appearance, Morosina threatens to establish an autonomous female identity, which seems very dangerous indeed to such a system.” Morosina also used her position and wealth to raise up others, paying to restore the Church of San Sebastiano and founding a lace-making school so young women might support their families.

Venice’s middle class was termed the cittadini, which included merchants, the clergy, and other educated professionals. Marietta Barovier and Hermonia Vivarini came from this social stratum and distinguished themselves in the glass industry, and another artist, Rosalba Carriera, won accolades as well. Venice was internationally known for its glass produced on the island of Murano. Though women were barred from the glass making profession, Marietta learned the skill within her family and eventually took over management of their factory alongside her brother. She was a skilled glass blower and painter, credited with her work on the famous Barovier wedding cup, and in 1480 she also designed the rosetta bead, which became so popular and valuable that it was used as currency as far away as Africa. Similarly, Hermonia Vivarini learned glasswork at her grandfather’s knee. She produced a glass pitcher shaped like a ship, called a navicella, and she actually won a patent for this design in 1497. Two centuries later, Rosalba Carriera showed her skill in innovation as well. She initially painted miniatures on snuffboxes, creating a new technique of painting in tempera on ivory for sharper images. Rosalba later turned to pastel portraits, influencing this medium across Europe and being hailed as one of the masters of the 17th century rococo movement. She chose to never marry and lived an independent life unlike most Venetian women.

Though many women of the upper classes learned to draw and paint, not many of them had the opportunity to enter the arts or letters professions as men did. This and other inequalities rankled a number of early proto-feminists who expressed their anger in their writing. Modesta Pozzo, writing under the pen name Moderata Fonte, penned a number of essays as well as a fictional dialogue representing a group of women as they discussed literature, health, astronomy, and other topics. In 1581, she also wrote Floridoro, one of the earliest epic romances to feature a female protagonist, Risamante, who literally slays a dragon to save a besieged woman. In response to a tract titled On the Defects of Women, Lucrezia Marinella replied in 1600 in her treatise titled The Nobility and Excellence of Women, where she wrote, “But if women, as I hope, wake themselves from the long sleep that oppresses them, how meek and humble will those proud and ungrateful men become.” She argued that women equal men in their abilities and that men prevent women from learning in order to suppress them, from a fear that women will overtake men in all pursuits. Arcangela Tarabotti, an unhappily cloistered nun, reiterated these sentiments in multiple writings, including Paternal Tyranny published in 1654. Coming at the equality issue from a different angle, Veronica Franco, a poet and courtesan, argued for women to be allowed education so as to give them more options. Though her vivid and exuberant poetry reveals many joys, her letters contend that her life is fraught with fear, violence, oppression, and instability. In a 1575 poem she wrote, “And I undertake to defend all women / against you,” warning men about her goal of empowerment and protectiveness. Her contemporary Angela del Moro, also a celebrated courtesan, experienced humiliation from an angry client. Angela survived and indeed thrived, proving her moxie and strength. Is standing up for the rights of others an attribute of beauty, too?

A later cadre of likeminded women moved these arguments a step forward. While the women of the 16th and 17th centuries were largely silenced and made invisible, the women of the 18th century began to wield some social capital. Caterina Dolfin Tron, Giustina Renier Michiel, Giustiniana Wynne, Isabella Teotochi Albrizzi, and Marina Querini Benzon were among the most prominent Venetian women to host literary salons in their homes. Their conversations and publications were known across Europe, and they became arbiters of new social mores. Caterina began listening to citizen’s petitions for government assistance, alongside her husband the Procurator, while Isabella published her Ritratti, descriptive essays of important thinkers. Giustiniana is credited with inventing the anthropological novel, Giustina is the first person to translate Shakespeare into Italian, and Marina lived a life with more equality and liberation than had been previously accepted. These women were groundbreakers who wrote new roles for women in their society.

Numerous other noteworthy Venetian women left us with musical compositions, writings, public works, and legacies that attest to their intelligence, wit, compassion, and talent. The first woman in the world to earn a university degree is a Venetian, as is the most prolific composer of the 17th century. Vivaldi wrote 37 violin concertos for a Venetian woman, and another showed her strength by winning five boat races over a span of forty years. Though my book A Beautiful Woman in Venice spans seven centuries, it describes the lives of only about 35 women, a shockingly small number for that length of time. Women’s lives are too often erased from history. A Beautiful Woman in Venice tells their full stories and gives voice to their fears and joys and triumphs.

© 2016-2023 NFReads.com and its licensors. The material appearing on NFReads.com is for educational use only. It should not be used as a substitute for professional medical advice, medical diagnosis, medical treatment, legal advice or financial advice.