How many people have the distinction that their name has become a common noun? Giacomo Casanova is one such person. Though he lived in the 1700s and is best remembered as a seductive lover, few people realize that he was also a prolific writer, a mathematician, a gambler, a cabbalist, a spy, a law secretary, and even briefly a priest. In Casanova’s 12-volume memoirs, History of my Life, he recounts his childhood in Venice as well as his wanderings around Europe, one of the most informative chronicles of the 18th century.

In my book Seductive Venice: In Casanova’s Footsteps, I lead readers to over ninety locations in Venice related to Casanova’s life. These include the contested location of his birth: Was it the house on Calle Malipiero that the posted plaque points to or his grandmother’s house around the corner that the Casanova scholar Helmut Watzlawick directs us to? Casanova describes his grandmother as “that excellent woman, who loved me unfailingly till the day of her death.” Nearby is the Church of San Samuele where Casanova’s parents were married, where he was baptized, and where he gave two sermons: the first a resounding success that resulted in coins and love letters in the collection box and the second where he passed out and fled in embarrassment, choosing to disavow a life as a priest. “I can assure my reader that I have never known whether I pretended to faint or fainted in good earnest,” Casanova writes. “All I know is that I dropped to the floor if the pulpit, at the same time hitting the wall with my head and wishing that I had split my skull.” The Teatro San Samuele, which is now a school, saw the first meeting of Casanova’s parents when they were actors, while Casanova later played the fiddle in the orchestra.

This fiddle playing served him well, for it led to his auspicious meeting with Senator Bragadin as the two were leaving a wedding, the Senator as a guest and Casanova as a musician. When Casanova returned a letter that Bragadin had dropped, the Senator offered Casanova a ride home in his gondola–luckily for Bragadin, who suffered a sudden stroke just minutes later. Casanova procured a doctor and stayed with his new, stricken friend through his convalescence; Senator Bragadin then informally adopted Casanova as the son he never had, saying, “if you wish to be my son, you have only to recognize me as your father and from thenceforth I will treat you as such in my house until I die.” Seductive Venice takes readers to the Palazzo Soranzo in Campo San Polo where the wedding took place, as well as to the Palazzo Bragadin-Carabba, where the Senator gave Casanova his own apartment and gondolier. Whether reading the book while strolling the streets of Venice or enjoying the stories from one’s armchair, Casanova’s own words bring to life his adventures and philosophies.

A number of locations relate to Casanova’s friends, many of them from Venice’s most noble families. Ca’ Memmo, the home of one of Venice’s Procurator’s Andrea Memmo, was also the haunt of Casanova and the Memmo boys when they were young, though Signora Memmo, the boys’ mother, felt that Casanova was a bad influence on her sons. Besides his friendship with Senator Bragadin, Casanova was also befriended by Senator Malipiero, who invited adolescent Casanova to listen and learn about high society at the dinners and gatherings in his Palazzo Malipiero. “Thus he inculcated,” writes Casanova, “the sound precept of discretion in me.” Casanova met with ambassadors from other countries in the Palazzo Loredan degli Ambasciatori, the Palazzo della Vechia-Vigonza, and the Palazzo Mangilli-Valmarana. During the 18th century, many people entertained in their casino, a small salon used for social gatherings, usually in a building separate from their home. Seductive Venice directs travelers to many of these buildings: the Palazzo Fontana, Palazzo Zaguri, Palazzo Diedo, and the casini of Pietro Zaguri, Marco Dandolo, and Lorenzo Morosini, among others. Casanova describes how these powerful friends helped him: “My protectors—that is, the Procurator Morosini, Senator Zaguri, and my loving friend Dandolo—wrote me that if they did not succeed in obtaining my pardon during the twelve months during which they [the newly sworn-in Council of Ten] were to sit, they must give up hope of ever attaining it in their lives.” Palazzo Bellavista was the home of another friend, poet Giorgio Baffo; Casanova recalls that Baffo “was the cause of the decision that I should be sent to board in Padua, and to whom, in consequence, I owe my life” because education had such a profound effect in shaping Casanova’s career. Casanova’s own casino was near Campo San Moise. 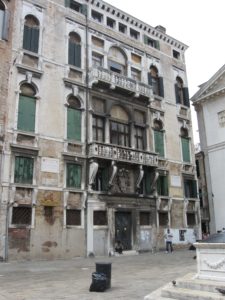 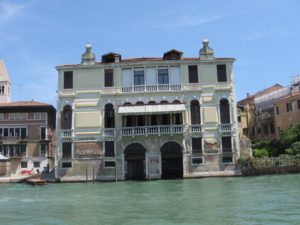 Before the Venetian Republic fell to Napoleon in 1797, Venice had even more churches than it has now. Casanova mentions a number of them in his memoirs. At the Church of Santa Maria Formosa, he signed the register as godfather to his friend’s daughter, while the Church of San Samuele saw his own baptism and the marriage of his parents. At the Church of San Francesco di Paola, Casanova met with a priest whom he was supposed to work for, though Casanova later changed his mind about pursuing a religious life, while he mentions witnessing a religious profession, where a nun took vows, at the convent of the Vergini behind the Arsenale boatyard. Casanova points out that at the convent “they are all Venetian ladies from the leading families.” He tells of his ignominious abandonment on the steps of the Church of the Gesuiti, after he was expelled from the seminary on Murano. His patron Grimani “took me to i Gesuiti,” writes Casanova, “where he left me without a soldo and possessed of nothing but what I had on.” Some churches, such as the one at San Canzian and at the Lucchesi Chapel, Casanova used as a meeting place to send and receive messages about women he was in love with. Casanova even vowed initial religious orders at the Basilica San Marco. Certainly, the churches of Venice were not only places for religious worship for this active young man. 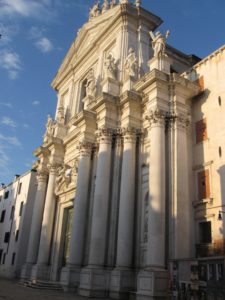 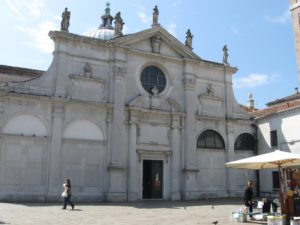 Of course there weren’t as many theaters as there were churches, but in fact Venice had more working theaters than Paris at that time. Casanova even managed a troupe of French actors at the Teatro Sant’Angelo. He also tells us about attending the shows at Teatro San Moise and Teatro San Giovanni Grisostomo, and performing as a fiddler at Teatro San Samuele. “Seeing myself for what I was,” he writes of this time, “I deliberately stayed away from all fashionable gatherings and from the houses which I frequented before I took up this sorry profession.” While escorting a lady friend to the performance at Teatro San Luca (now Teatro Goldoni), he was falsely accused of using a counterfeit coin, which embarrassed and angered him. Later in Casanova’s life, when he needed employment, he worked as a spy for the State Inquisition; the Archives contain these records where Casanova reported on “the scandalous disorder produced in the theaters when the lights were extinguished” at Teatro San Benedetto and Teatro Michiel. 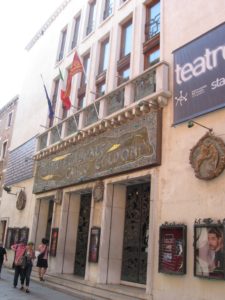 Unfortunately, Casanova was also the subject of State spies; his meeting with a nobleman at the Al Buso drink shop was reported to the authorities by the spy Giovanni Manuzzi, who also deceitfully befriended Casanova in order to see his library of censored books. In his report Manuzzi writes that in Casanova “one sees truly united in him misbelief, imposture, lasciviousness, and voluptuousness in a manner to inspire horror.” The reports describing Casanova’s rented rooms in the Widow Pozzo’s home near Campo SS. Giovanni e Paolo eventually led to his arrest and imprisonment in the Leads, the attic cell in the Doge’s Palace. The final chapter of Seductive Venice recounts the remarkable story of his eighteen months as a prisoner and his clever escape out the roof and down through the Doge’s Palace. “It is the duty of the State Inquisitors to use every means of holding a guilty man in prison, while the latter, if happily he is not on parole, should do his best to escape,” writes Casanova philosophically.

Though many people know Giacomo Casanova only as a great lover, and know Venice only as a city of glass and mask shops and canals, another story resides in many of the locations people walk past every day. Seductive Venice: In Casanova’s Footsteps reveals the stories of the eighteenth century as seen through Casanova’s eyes, eliciting a Venice filled with intrigue, personalities, and a rich history just waiting to be discovered.

Learn more about the book and view photos of these locations and many more at www.seductivevenice.com. Seductive Venice is available in paperback at this website, on Amazon, and in the bookstores and museum shops of Venice, Italy. You may also choose the ebook version at www.smashwords.com, iTunes, and other ebook retailers. If you hit Venice’s pavements on foot, the book’s maps and directions will lead you confidently from one location to the next. Or if you choose to enjoy Casanova’s adventures from a more comfortable vantage point, Seductive Venice brings to life the city and the man like never before.