I like to read about history, but really hate just reading dates of battles, Generals’ names, etc. I find those boring, though not when I learn some details about their lives or personalities. I want to know about the people’s lives, how they dealt with their problems, etc. So when we moved to Taylors Falls, Minnesota and I learned it was the site of the largest logjam in the world, I felt floored.

I was born and raised in southern MN, about 200 miles from TF. Why hadn’t I ever heard of this? Why wasn’t it mentioned in all the Minnesota history courses I’d taken in school and college?

My husband and I ran the local grocery store in TF. Tourists came in from all over the world and told us they’d read about that happening in their schools. I learned that event had garnered worldwide attention and made the history books as far away as Sweden. Reporters had arrived by train from all over. Why is it ignored in Minnesota’s history books? Weird.

So when the TF Chamber of Commerce wanted someone to do an article on this event in 1986 for the hundredth anniversary of the big jam, I volunteered. And thus began my weeks of research into this event. The Taylors Falls Journal had lots of pictures and articles. And the ads of things for sale in those papers told me a lot about the way the people lived then, too. Fun reading! Both the Minnesota Historical Society in St. Paul and the Wisconsin Historical Society have numerous pictures taken at the time and articles written in the local newspapers, detailing the battle with nature as it happened.

The article I wrote was featured in the centerfold of American Forests, the official publication of the American Forestry Association, Washington, D.C., in June, 1986. Versions of this article were also re-printed in The Minnesota Volunteer, The Dalles Visitor and The Land Magazine that summer. 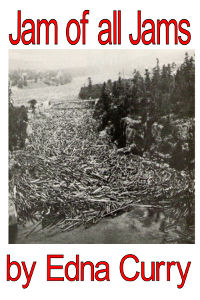 The Jam of all Jams

That article combined with the one I did the following year about the Nevers Dam, the greatest wood-piling dam ever built, is available on various online sites for the Kindle, Nook, Kobo and other e-readers as well as for those aps on your computer.

Each winter, the loggers cut the tall pine trees and stacked them on the banks of the tributaries of the St. Croix River. They counted on spring rains to carry those heavy logs down river to the sawmills, most of which were at Stillwater, MN. There were no good roads, so the river was their only good way to transport those logs to the sawmills. Until the logs could be sawed into usable lumber and shipped on down the Mississippi River to various cities, the loggers wouldn’t get paid. People were living in sod houses and waiting for lumber so they could build homes, barns and businesses across the Midwest. The Frontier was booming and lumber from the great pine forests was badly needed.

In the spring of 1886, rain was scarce and the two hundred or more lumbermen who depended on the river were getting scared they’d all go bankrupt.

When rains finally came in June, panic set in, and the result was the biggest log jam ever at Angle Rock in Taylors Falls. Too many logs had been shoved into the river at once and were trying to get around that sharp bend in the St. Croix River and jammed up until the river was filled with logs for two miles upstream. It took six weeks of work, two hundred men, hundreds of teams of horses and lots of dynamite to finally break the jam.

After doing all this research and becoming engrossed in these people’s lives, I decided to also write a novel based on that event. The historical romance is fiction, but all the historical facts used as background are true. It’s a fictional romance novel set against the background of the big log jam pictured below from the 1886 Taylors Falls, MN, log jam, the largest log jam Ever. It depicts life in the logging days with lots of detail about the lives of people during that time.

What happens when a rough and ready logger who wants no responsibility and thinks he doesn’t deserve a second chance at love falls for an attractive prim and proper lady with a ready- made family?

Will and Carrie think there is no chance for them to have a family of their own. Each has reasons to avoid love and entanglements. Will is burned out on responsibility after helping his widowed mother raise his siblings. He turned away from God when his wife and infant son died. Carrie thinks no man will want her and her brother. She promised her father she’d raise her brother and while she’s attracted to Will, duty comes first.

Then the greatest logjam in the world throws them together for six weeks. Will is staying at the boarding house where she works while he and many others try to break up the logjam. Can their love last beyond the summer logjam?

Link to Edna Curry’s other works at Amazon: http://amzn.to/1NADOXb