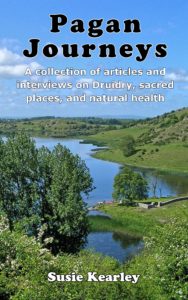 Have you ever been curious about the pagan traditions and the lives of modern Druids when they come out to celebrate the seasons around Stonehenge and other national monuments?

Perhaps you’re interested in the spiritual lives of those who follow the earth religions, or in the stories behind the stone circles and other places that were important to our pagan ancestors?

If this area interests you, you might enjoy my new book, Pagan Journeys. It includes interviews with pagans, druids, and those who follow the earth faiths, including an indigo child and clairvoyant. It includes an account of my first druid ceremony, and takes you on a journey to sacred locations across the UK, and what there is to see at each of them.

The third part looks at natural health in relation to paganism, with methods like meditation, vegan living, and other aspects of pagan or natural lifestyles explored.

There’s an article on the naked bike ride, and someone’s first experience, participating in the event, which promotes the natural world, sustainable lifestyles, and rejects the dirty oil culture, and the idea that the way we look and the clothes we wear, define our worth.

It’s an interesting, perhaps surprising, and sometimes controversial read, looking at the pagan journey from many different angles. For anyone with a sense of curiosity around this subject, it’s a great introductory text, exploring some of the aspects of the pagan lifestyle that you may not even think about, as well as looking at stress management, and letting your mind heal your body.

I’m a freelance writer, working for magazines around the world, and my journey into the pagan world began, when I was asked to find two druids to interview for a magazine article. It was hard finding people to talk, as many druids had experienced negative press and didn’t trust people like me, but eventually, I found two druids willing to help, and proceeded from there. The connections led from one thing to another, and I gained more of an interest in the pagan lifestyle – although it had always been curious. Now I found myself in touch with people living the pagan lifestyle, and found a group of druids near my home. I wondered if this lifestyle was right for me, so I met with them, and they invited me to join their winter solstice ceremony. I wrote an article on the whole experience, which although never published elsewhere, is included in this book.

I developed a fascination with pagan symbols and the natural world, and I’d already had a longstanding interest in health and nutrition. I found a lot of cross over between the two. So this is my book on the pagan journey, and the people I met along the way.

Walk along the high street in the small market town of Princes Risborough in Buckinghamshire, England, and you’ll find an abundance of small independent shops, including many gift shops and specialist retailers. Nestled in amongst them is a shop and healing centre called Crystal Serenity. It is located inside a beautiful grade II listed building, with black Tudor beams, and as you walk in through the door, you are hit with a wonderful healing energy (so say those who can feel it) and the aroma of incense.

Princes Risborough is so named because the Black Prince, Edward III of England, used to have a mansion there. Today, his once stately home is buried under a car park, but the town still has an interesting history and a rich heritage.

Helen Shrimpton felt Princes Risborough was the right place to realise her dream of opening a crystals shop. She brings something completely new to the town, and whilst many businesses have failed in the hard economic times, Helen’s little business does seem to be thriving!

So what’s her secret? Well, a passion for her craft and a lifelong ambition to work in crystal healing go a long way to spurring the bright lights of success.

Helen explained: “From the age of two, I was fascinated with stones and crystals, picking them up on the beach and keeping a collection which helped to bring me luck and good fortune. As a young child, I put notes under special stones to try and make the things I wished for come true. It often worked. I was gifted and could see into the future.

“I have memories of talking to angels, spirits, fairies and other gentle beings in nature, but this was knocked out of me as a child, by unbelievers who said it was my imagination. Life became very lonely as I felt no-one understood me. There were many times when I knew something was going to happen, but was accused of having an over-active imagination.

“When I grew up, I trained in hairdressing and throughout my early career, I felt I’d been as much a healer as a hairdresser. I’d spend days in the salon, hearing about other people’s lives and helping them work through their problems! I felt a special joy in making people feel better, and have always had the ability to know when and where someone was hurting.

“It wasn’t until my marriage broke up, that I decided to rebel and be the hippy that I’d always felt inside! I decided I’d had enough of employment law and hairdressing, and followed my spiritual calling to be a healer…”