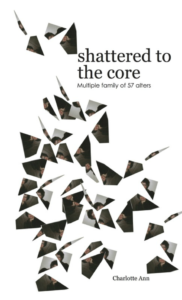 As I was growing up on the west coast I always thought that I had a very loving family but why could I not remember my childhood when I reached adulthood? I did not think much about that because I became involved with alcohol and proceeded to become addicted to it. I spent many years drinking while I was married to a very abusive man who at that time I did not realize he was an abuser because unbeknownst to me at that time I had grown up in  a family with severe abuse issues and that was all I knew. I did not come to realizing this until I finally was able to get my drinking problem taken care of which was not until I was about forty nine years of age. It took me three different times to completely leave my husband because he always said he would get help and he never did. I moved out on my own but yest there was things going on in my head that I did not understand. I kept hearing voices and they were all different some were of angry voices, some laughed hysterically, one moaned all the time, another voice stuttered while trying to talk. Many of my friends kept telling me they thought I had different personalities because I was never the same person just as my husband used to always tell me. During this time I started remembering so much from my family members. I could hardly keep going my depression at that time was very bad and I just wanted to stay in bed all the time. The flashbacks were horrendous. I decided to go to my therapist at that time and tell him I thought I had different personalities and he agreed with me because he had seen many of them. S began my journey of getting to know my personalities. At the same time I felt I needed a new start somewhere far away because I did not feel I could get better if I stayed where there had been so much trauma. I had planned to sale all of my things and take a trip across the country to settle in the state of Maine. I had picked out the town that I would settle in before I went.  After finally getting there and settling down I tried so hard to find a good therapist that would believe my diagnosis but I could not. Everything was so discouraging. I found a psychiatrist that would pres scribe my meds for my depression but they kept telling me I either was Bi-polar or I had schizophrenia which was neither the case. They kept giving me all this medication and I finally got fed up with what they were doing and I stopped all their meds except for my anti-depressants and this is when I decided to write my Memoir. I found a wonderful quiet island to move to in Maine and there is where I started writing my Memoir. It took me three years to write it and all during that time I was constantly feeling suicidal. I kept taking myself to the emergency room of the hospital but all I was suffering from was severe panic attacks. I finally found a child psychologist who would work with me because I had eight little alters who were between the ages of one year and five years of age. I could not stay on the island because I felt cutoff from the rest of the world and so I moved off the island. Therefore I had to find a new therapist. in time I found one that was very good. I started out with 57 alters so I had a great deal of work to do because I was trying to integrate my alters into one and this was a great challenge. I had several teenage alters who I then started working to integrate. When I look back on the full amount of years that it took for me to finally get to the point that I am now integrated it began fifteen years ago. If I had not been misdiagnosed then the years would have been much less. I think this is why I felt that writing my Memoir was so important so that others would see they are not alone and it could give them support. I always felt that there were so many out there who were being misdiagnosed that they were going through or would go through what I went through. Sometimes my therapists were not exactly as helpful to me as I thought they should have been but eventually I was able to get to know each of my alters and then to get them to trust me and in time they would share their pain with me and we could then work on integrating. I had both men and women alters, two little boys, several little girls, young adults men and women, and also very old alters.

For someone who has Dissociative Identity Disorder they can have many symptoms such as depression,gaps in memory, impairment of functioning, PTSD, suicide attempts, Personalities are opposites, each alter has its own memories,blackouts of  time duration’s without the use of alcohol. Refer to themselves as we, different handwriting’s, phobias, sleep walking, auditory hallucinations, hostility and anger, problems with trust, a sense of betrayal, and substance abuse. I have had all of those symptoms. You will love reading my Memoir and you will not be able to put it down it is the story and long journey of love for myself and my alters in becoming integrated. I have been told that my book could be used in college courser as a personal example of someone with this diagnosis. This is why I have contacted several professors from Universities and Colleges in my state to do public speaking in their classes. I believe my story is a very good example of self-improvement that I can think of. I am hoping that those who read my Memoir would be kind enough as to go to my Amazon page and give me your honest review that would be so very much appreciated. This book is a great teaching tool and I plan on doing my best to get it out into the public. I truly believe if I had to do it over again I would be grateful for this true and honest journey into self-love.