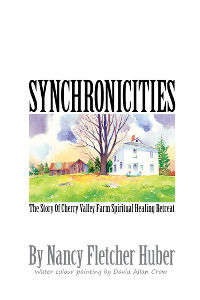 Cherry Valley is a town about 30 miles from Dublin where John Thompson Fletcher emigrated from. They named their farms after their home towns in the “Old Country”.

Since I come from a long line of Irish story tellers, I was lucky enough to have the family history passed down the generations.. My children kept telling me I should write them down. Trusting that they didn’t know something I was unaware of, I began to write. Memories of some stories triggered more memories as I frantically tried to get it all down. Pioneer days held a fascination for me since people had to work so hard and be as inventive as they possibly could in order to survive. When I think of the comforts and conveniences we have now compared to what they had to do it, it’s astounding. But then everyone endured the same conditions and they wouldn’t have known to feel deprived. My Grandfather told me once “I never dreamed that in my lifetime cars and airplanes would be invented and even a man sent to the moon”. My Grandmother never forgave him for not investing in the first automobile Company since he thought it would never take off.

The people of my Grandparent’s generation still had a hint of the Irish lilt in their speech and often an Old Country phrase such as “I’ll skite ye”. It was a wonderful comfort to know where you came from and learn the personalities of your ancestors. Although history may have been a tad skewed since everyone knows history is written by the winners.

The ancestors continue to show up in the Workshops that are held there now, and have been seen on the land. They are delighted that their stories have been told, and enjoy the Classes. Orpha my Great Grandmother has been known to come out of her life sized wedding portrait to join in. On two separate occasions I’ve had each Grandparent say “I like what you’ve done to my house”. It was interesting that I had bought the paint to paint the walls as soon as the wall paper was removed, and discovered on the removal I had chosen the original colours, only a shade or two lighter. We are never alone, and often influenced by them.

The labyrinth at Cherry Valley came about because I had met and clicked with a lady from California on the web. She advised I should have a labyrinth there. I was unfamiliar with the concept. She told me I should check out the labyrinth at St Paul‘s church in Newmarket. She did not know that I had attended St Paul’s, and it was just around the corner from my Newmarket house. Some weeks later at a conference I took a table at a breakout session and chose a table where I hooked up with two ladies who had been pastors at St Paul’s and they were instrumental in getting the labyrinth made there. How many signs did I need?

The discovery of the healing portals at the farm was not mine. I had people telling me they were there. I do not believe something I can’t see, unless I have had three different people tell me the same thing on three separate occasions. At the first experiencing of the energy at a portal, I felt like an idiot holding my hands out to receive the energy as everyone else was doing, and felt nothing. It took a while to realize I was feeling something,just not recognizing it. It’s not a bad thing that I’m not as sensitive as others to energies, or I would never be able to gift the Munay-Ki Rites. These ancient Rites have been passed down for 30,000 years. Shamanic tradition is oral and it is amazing that the words are passed down without each person adding their own personal ego stamp on them. Before opening Cherry Valley farm to the public, I was advised to have an “Honouring The Earth’s Spirits” ceremony there. Peter Bernard the Algonquin Shaman said the energies there were of high healing, but I could have some blocks that would have to be removed before it could operate properly. He came and those who were sensitive to spirits said the spirit crowd that attended were elbow to elbow. One said the energies coming in hit her like a freight train.

I was immediately drawn to the Munay-Ki Rites and knew I had to have them at Cherry Valley. Julia Bales from the Four Winds Society taught them to me and her Opening Sacred Space Ceremony was identical to Peters except the animals he called in were North American and hers were from South America (because she learned the Rites there).

Many of the Workshops at Cherry Valley are about communication. With your Angels, guides, Animal Totems or spirits. And many more about healing with colour, sound, crystals and energy. Alternative Healing Certification courses are also taught such as Reiki.
Come and have your Akashic Records read or get answers from your guides through a psychic medium.