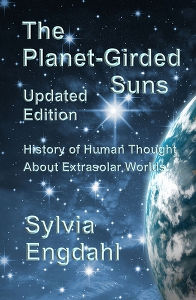 During the past half-century there has been growing interest in the possibility of intelligent life on the planets of other stars–and not only in science fiction. On one hand, a significant percentage of the public believes in UFOs. On the other hand, while scientists don’t think UFOs are of extraterrestrial origin, most are convinced that distant extraterrestrial civilizations probably exist. SETI, the Search for Extraterrestrial Intelligence, has been using radio telescopes to listen for evidence of messages from such civilizations since the 1970s. And the conviction that we are not alone in the universe has been strengthened by the recent detection of extrasolar planets, though none of those so far discovered are suitable for habitation.

Most people, even most scientists, wrongly assume that widespread serious belief in the existence inhabited extrasolar worlds is quite new, dating no further back than the middle of the twentieth century. Moreover, it’s frequently said that evidence supporting this belief would be upsetting to people’s religious views. Some even fear that their own opinion about it would be considered contrary to their religion. Personally, I don’t view the issue from a religious standpoint. But I think it’s important to correct the common misconception that religious opposition to the idea of many worlds continued later than the seventeenth century.

In a Huffington Post article titled “Life on Mars and the Garden of Eden,” Jeff Schweitzer stated that if religious leaders now say discovery of extraterrestrial life is consistent with their teachings, it will be “a rewrite of history and an ex post facto rationalization to preserve the myths of the Bible.” The difficulty with this statement is that it is historically inaccurate. It’s a little-known fact that from the middle of the seventeenth century until the early twentieth, almost all educated people believed that the stars are suns surrounded by inhabited planets–and they did so on religious grounds. Clergymen preached long sermons arguing that it would be irreverent to think that God created the stars merely for people on Earth to look at. All things were created for a purpose, they maintained, and the only purpose anyone could think of was habitation; therefore, they assumed that extrasolar planets are inhabited.

Because there was indeed religious opposition to the concept of other worlds in the early seventeenth century, people today generally suppose that it continued. The extensive discussion of other worlds in books, articles and poetry of the eighteenth and nineteenth centuries was not mentioned in history books of the early twentieth century because at that time belief in extraterrestrial life was out of fashion; in fact, when I wrote The Planet-Girded Suns–originally published in 1974 and updated in 2012–I got all my material from primary sources of those centuries, many of them obscure. (Since then, a number of more detailed studies have appeared, intended for a more scholarly audience than mine.) Even books for children of earlier centuries declared that, in the words of one, to deny the existence of life elsewhere would be “to narrow our conceptions of God’s character, and to rob him of some of those exalted attributes assigned him by the unlettered savage.”

This is not to say that people of that era did not believe the Bible’s account of the creation of life on Earth; most of them did (although, as today, some viewed it as metaphor rather than literal fact). Rather, they argued that since God had created one world, he was surely capable of creating others and that it would be presumptuous on the part of humans to think otherwise. Although opinion was divided as to whether the worlds of other stars were inhabited by mortals or were the abodes of the angels, the belief in humanoid extraterrestrials predominated.

In 1854 a heated controversy arose when William Whewell, the Master of Trinity College at Cambridge and a noted historian of science, wrote a book arguing that Earth may be unique–an extremely unorthodox position at the time that was objectionable to both scientists and clergy. His most vocal critic was Sir David Brewster, a well-known Scottish physicist, mathematician and astronomer, who wrote a book in rebuttal titled More Worlds than One: The Creed of the Philosopher and the Hope of the Christian. (Both books are now available at openlibrary.org.) Brewster accused Whewell of “folly and irreverence towards the God of Nature,” and most book reviewers took his side.

The number of well-known people of the eighteenth and nineteenth centuries who casually mentioned other worlds in a religious context shows how widespread the belief was. Benjamin Franklin wrote in 1728, “When I stretch my Imagination thro’ and beyond our System of Planets, beyond the visible fix’d Stars themselves, into that Space that is every Way infinite, and conceive it fill’d with Suns like ours, each with a Chorus of Worlds for ever moving round him, then this little Ball on which we move seems, even in my narrow Imagination, to be almost Nothing.” The Puritan minister Cotton Mather wrote “Great God, what a Variety of Worlds hast thou created! How astonishing are the Dimensions of them! How stupendous are the Displays of thy Greatness, and of thy Glory, in the Creatures with which thou hast replenished those Worlds!”

As to other religions, all statements that I have seen declare that belief in many inhabited worlds has long been part of their tradition. The thirteenth-century Chinese scholar Teng Mu wrote: “Empty space is like a kingdom and heaven and earth no more than a single individual person in that kingdom. Upon one tree there are many fruits, and in one kingdom many people. How unreasonable it would be to suppose that, besides the heaven and earth which we can see, there are no other heavens and no other earths!”

According to the Muslim scholar Sayeedur Rahman, the Qur’an contains many references to other inhabited worlds. In a recent book he interprets some passages as directing us to seek them out and learn about them; he says, “Man should himself initially gather irrefutable rational and intellectual and experimental and observational arguments concerning the inconceivable expanse of the universe, its extraordinary ancientness, the profusion of earths in it, and the existence of the basic ingredients of past life on some of the neighboring ones, and, by considering himself not to be the lone inheritor of the universe, frantically venture out exploring the extraterrestrial civilizations.”

Until the twentieth century the widespread belief in extrasolar worlds was almost entirely religious–there was no scientific foundation for it, since there was then no relevant data available that could be studied scientifically. Although most British, American and European scientists of that era did believe in them just as firmly as other educated people, they too used religious arguments for their existence, and most thought that every single planet must be inhabited because otherwise it would be “useless.” Not until the late nineteenth century was enough learned about the planets in Earth’s own solar system to realize that they have no inhabitants. That discovery ruled out the formerly-unquestioned idea that all planets were created as abodes for life, and then in the early twentieth century a new theory about how planets are formed led science to conclude that it happens rarely. So the conviction that there must be extrasolar civilizations was temporarily abandoned, and several generations, those that grew up between the first and second world wars, forgot that it had ever been taken for granted.

In the mid-twentieth century, when interest in extrasolar life was revived, Christian and Jewish writers began considering it again, and the vast majority do consider it compatible with their beliefs, whether they take the Bible literally or not. The Jewish writer Meir Ben-Horin has said that someday educated man’s knowledge of terrestrial affairs may be “merely the ABC of his ‘higher’ or extraterrestrial or multi-global knowledge.” But now, speculation about extraterrestrial life is no longer based on religion, for now scientific knowledge about the universe is obtainable. And people with no religious faith, including those in the former Soviet Union, have felt equally strongly that Earth cannot be the only inhabited planet.

The Planet-Girded Suns tells the story of that view, including quotations from some of the many eighteenth and nineteenth century poems in which it was expressed. One by the poet Tennyson, written in 1829, gave the book its title:

. . . The clear galaxy
Shorn of its hoary lustre, wonderful,
Distinct and vivid with sharp points of light,
Blaze within blaze, an unimagin’d depth
And harmony of planet-girded suns
And moon-encircled planets, wheel in wheel,
Arch’d the wan sapphire. Nay–the hum of men,
Or other things talking in unknown tongues
And notes of busy life in distant worlds
Beat like a far wave on my anxious ear.

For most of the time during the past four hundred years, belief in extrasolar civilizations has been shared by nearly everyone with knowledge of astronomy. Only recently, however, has there been any thought of ever having contact with those civilizations. Earlier writers about the subject, especially poets, wistfully envisioned observing them during spiritual journeys after death, for it had not occurred to them that interstellar communication or travel by mortals might become possible. Now, we can hope that humankind may someday meet the inhabitants of other worlds.

For more information about the book visit The Planet-Girded Suns at my website. The price of the Kindle edition is $3.99 and it’s available to borrow through Kindle Unlimited. The paperback edition is priced at $10.95.